From breathtaking glaciers to imposing mountains down to small and beautiful country roads, it's no wonder many tourists go to Canada all year round. To inspire you further,  we at VroomVroomVroom have hand-picked our top 10 jaw-dropping drives in this fantastic country. Book and grab your rental car keys, rent an RV or hop on a motorcycle to explore some of the most captivating sights in Canada.

Book a Car Rental in Canada 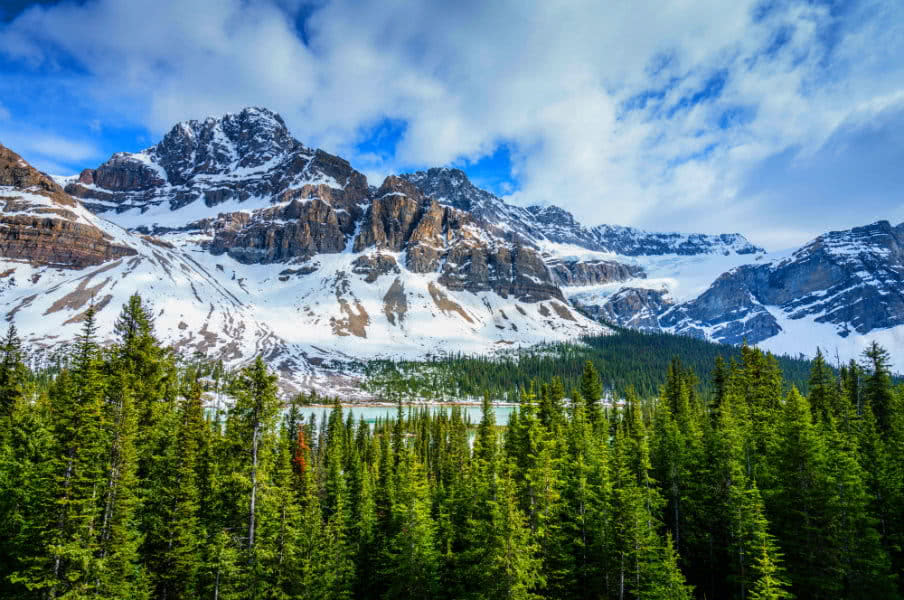 Situated in Alberta, the Icefields Parkway is recognized as one of the top ten scenic drives in the world, attracting more than 1.2 million visitors each year. Renowned for its majestic views of mountains, glaciers, rivers and all things nature, the Icefields Parkway stretches 232km (144mi.) through the heart of the Canadian Rocky Mountain Parks World Heritage Site. This scenic route winds its way through two national parks:  Banff National Park and Jasper National Park. Since it opened in 1940, tourists around the globe flock to the Icefields Parkway.  As others put it, "Being here is more that just traveling a mountain road - it's a journey of the self and a celebration of protected wilderness grandeur." With so many wonderful spots to take photos and trails to hike such as the famous Valley of the Five Lakes, Wilcox Pass, Nigel Pass and Toe of the Glacier - it's no surprise visitors are pouring in to experience it all for themselves. 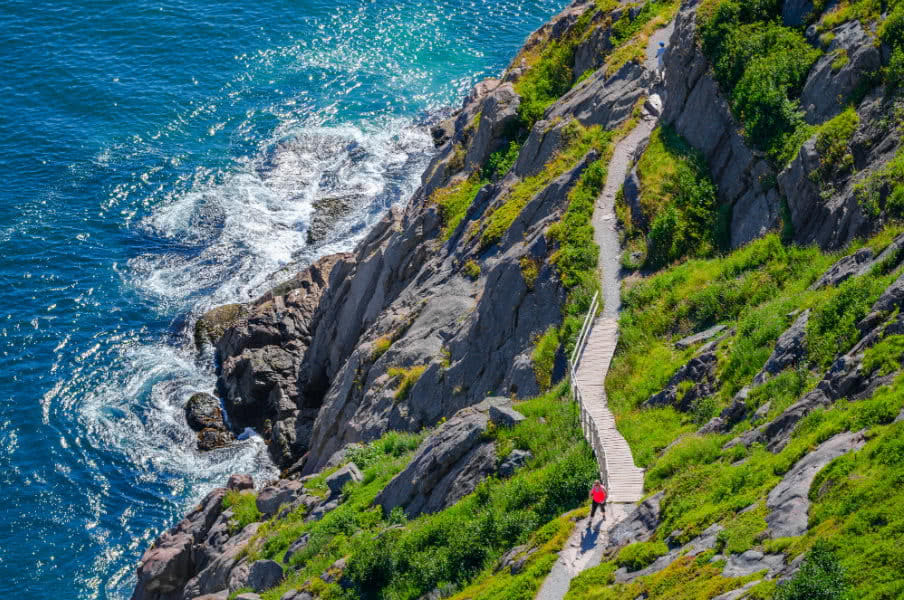 Another must-see is the enchanting Cabot Trail on Cape Breton Island in Nova Scotia , which is named after the famous explorer John Cabot. Although the Cabot Trail takes a few hours to drive, visitors will love its majestic coastal views and unspoiled natural beauty. Not to mention you will definitely want to spend at least a day or two to see the awe-inspiring coastal vistas and visit some fascinating towns nearby. There are endless adventures along the Cabot Trail just waiting for you.These include hiking on the Skyline Trail, kayaking, skiing, whale watching, star-gazing, cycling the Celtic Shores Coastal Trail, or boating... you will never get bored here. 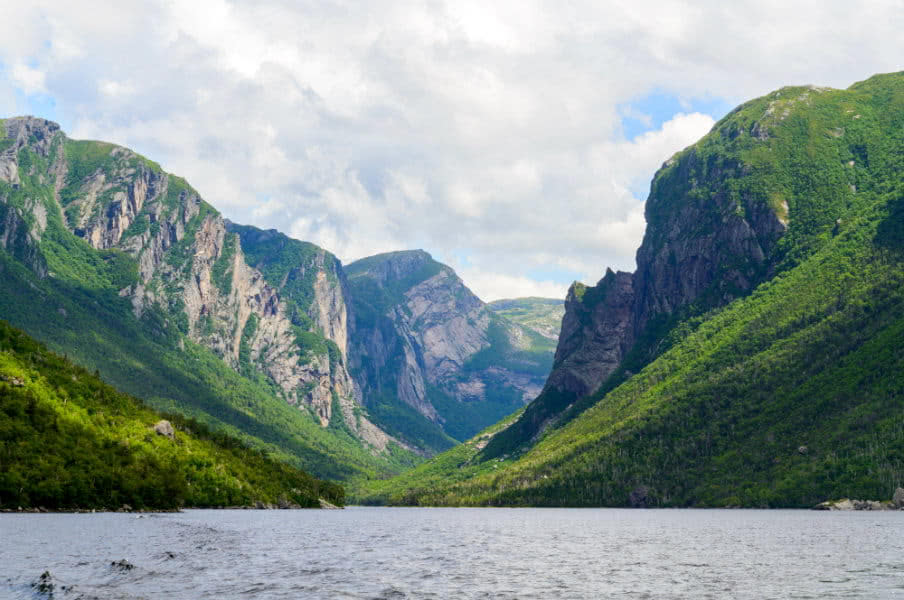 Planning to visit the Newfoundland & Labrador? Don't miss the stunning Viking Trail scenic travel route, which is a 443 km themed highway that reveals the former existence of not only Vikings, but Basque and native inhabitants as well. The Viking Trail is the only route to the incredible UNESCO World Heritage sites, which can be found at Gros Morne National Park of Canada and L'Anse aux Meadows National Historic Site of Canada. Offering plenty of must-see attractions, including the Lobster Cove Head Lighthouse, Western Brook Pond, Arches Provincial Park, Port Aux Choix National Historic Site and St. Anthony - we're certain yo'll find them worth the drive. 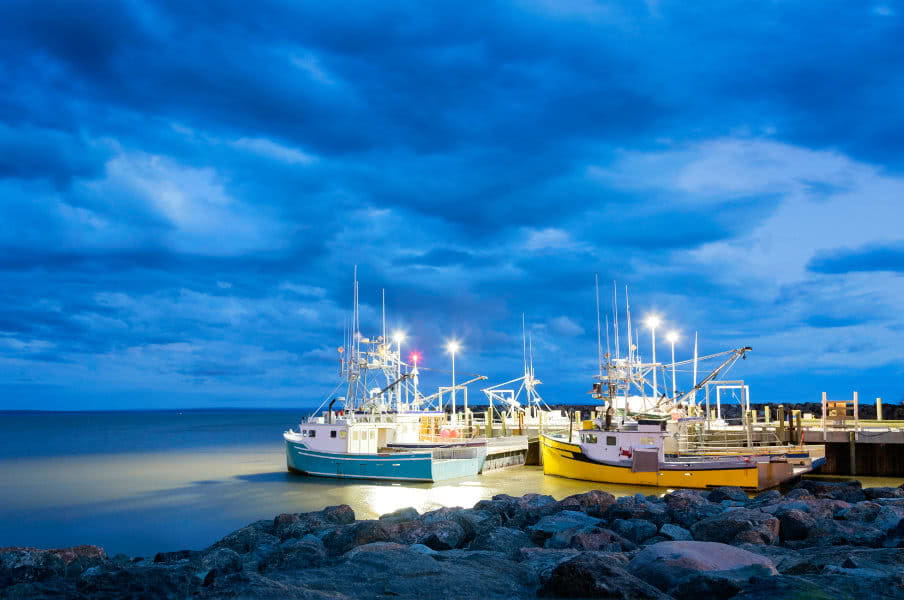 Nestled between Nova Scotia and New Brunswick, the astonishingly diverse Bay of Fundy is considered one of the 7 wonders of North America. Not only it is home to the world's highest tides (which can go to as much as 16 m or an equivalent to a 5-storey building), but also home to marine life and geological discoveries like dinosaur fossils. No matter how you plan to approach this gorgeous natural treasure: from kayaking the world's highest tides to walking on the ocean floor,or sampling delicious local cuisine around town - the Bay of Fundy experience will leave you breathless. 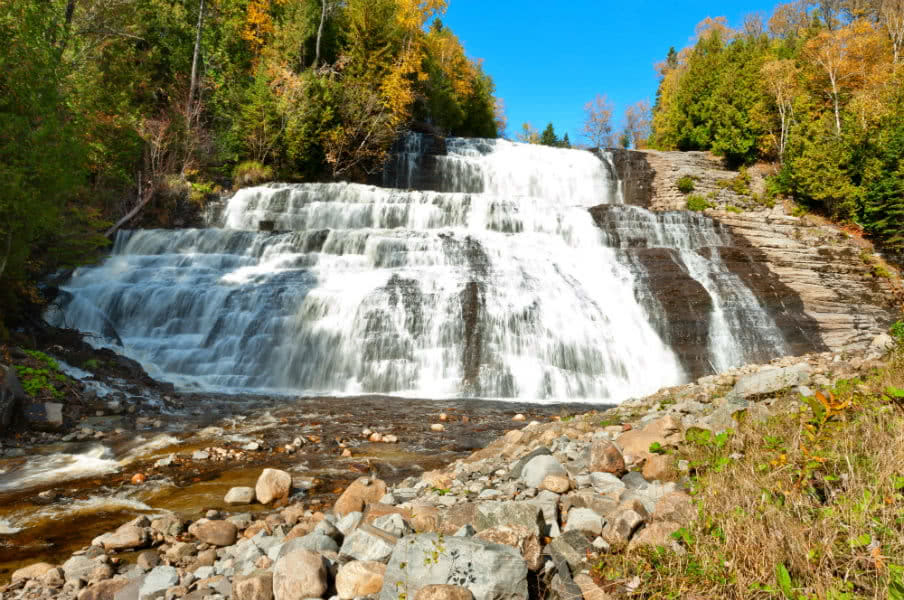 This scenic drive covers 58-km on Highway 362 between Baie-Saint-Paul and La Malbaie. Only half hour drive from Quebec, the drive will take you through the picturesque villages of Les Éboulements, Saint-Joseph-de-la-Rive and Saint-Iréné offering charming views and countless of fun activities worth stopping for such as taking a cruise, sailing, kayaking, or ice canoening. Allot extra time and be sure to stop by the popular landmarks nearby including the Le Manoir Richelieu, as well as the many historic museums, restaurants and crafts shops that dot the route. 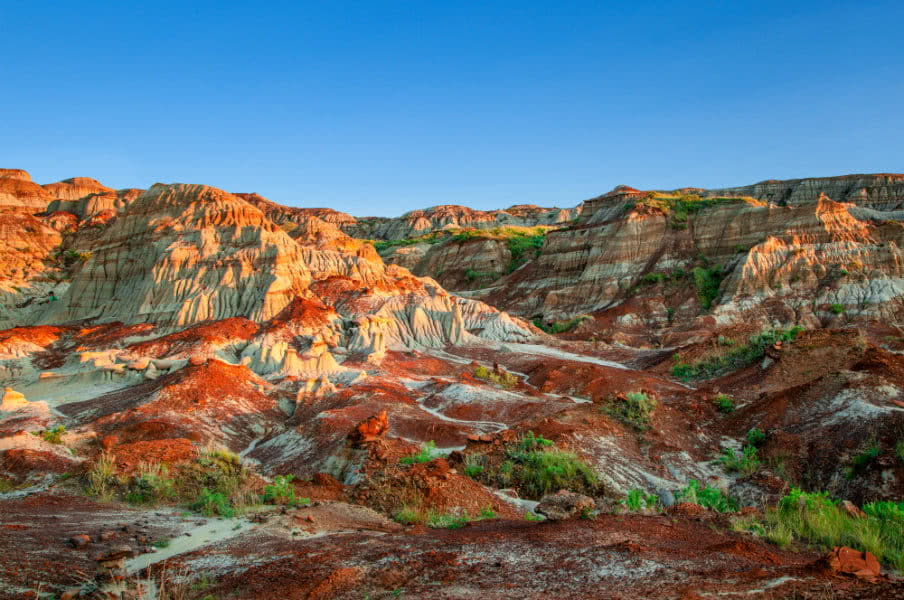 Located in Dinosaur Provincial Park, the Badlands Trail is the perfect destination for all dinosaur fans. Famous for its lunar-like terrain, it is  known as the first trail on the public scenic loop road. The views here are spectacular. Take time to unleash your inner nerd and get ready to examine remarkable rock formations and fossil beds. The Badlands Trail loops through Calgary, Drumheller, Medicine Hat and Lethbridge which could take a few hours to drive without stopping. A lot of tourists normally spend extra days to explore the area.

Trans-Canada Highway - From Victoria to Newfoundland and Labrador 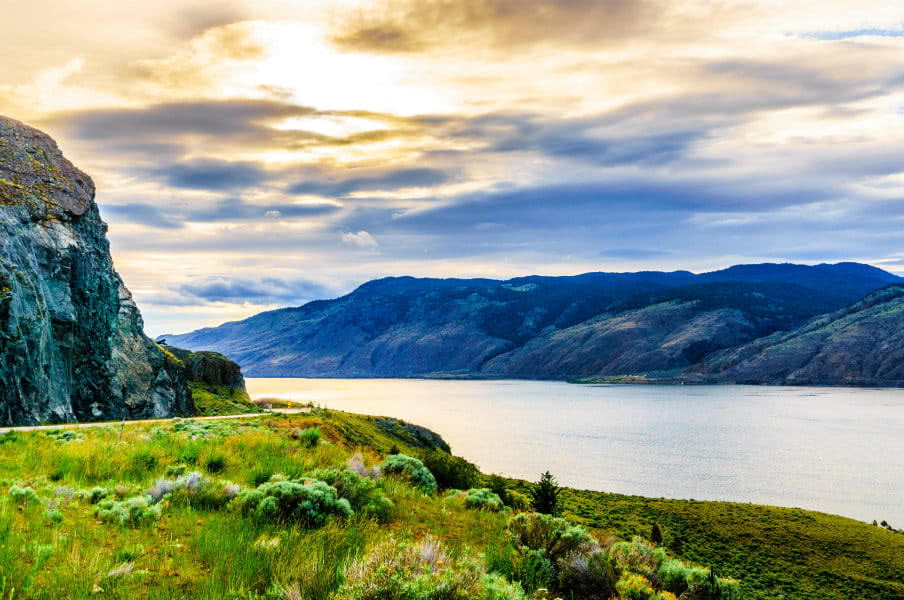 The Trans-Canada Highway between Victoria, British Columbia and St. John's, Newfoundland is unquestionably the ultimate Canadian road trip. More than a million people travel on a part of it everyday. It is also the longest national highway in the world with a length of 7,821 km (4,860 mi.) The midpoint of the highway is at Batchwana Bay, more than 65 km north of Sault Ste. Marie in Ontario. They say you haven't fully explored Canada until you've driven through the prairies and viewed the contrasts of both coasts. Check out our not-to-be-missed attractions and stops on the  Trans-Canada, including the Gros Morne National Park (Rocky Harbour, Newfoundland), The Old City (Quebec City, Quebec), Parliament Hill (Ottawa, Ontario), Whiteshell Provincial Park (Manitoba), The Starship Enterprise (Vulcan, Alberta), Banff National Park (Banff, Alberta), Mac the Moose (Moose Jaw, Saskatchewan) and Stanley Park (Vancouver, British Columbia). 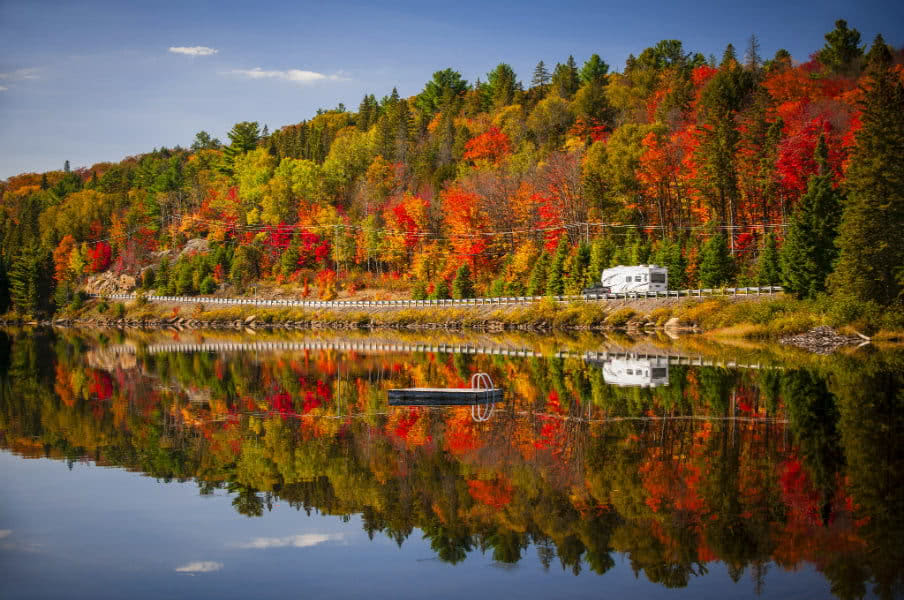 Central Ontario's Algonquin Park is famous around the world for its awe-inspiring outdoor activities, including snowmobiling, fishing, canoeing and swimming . But the best way to reach the fun is with a scenic drive along the King's Highway 60 Corridor, simply known as Highway 60, which only takes an hour. Along the drive, you will see many areas to stop for a picnic, as well plenty of campgrounds, museums, and beaches to explore. In addition to that, make sure to watch for wildlife as you ride through the park. 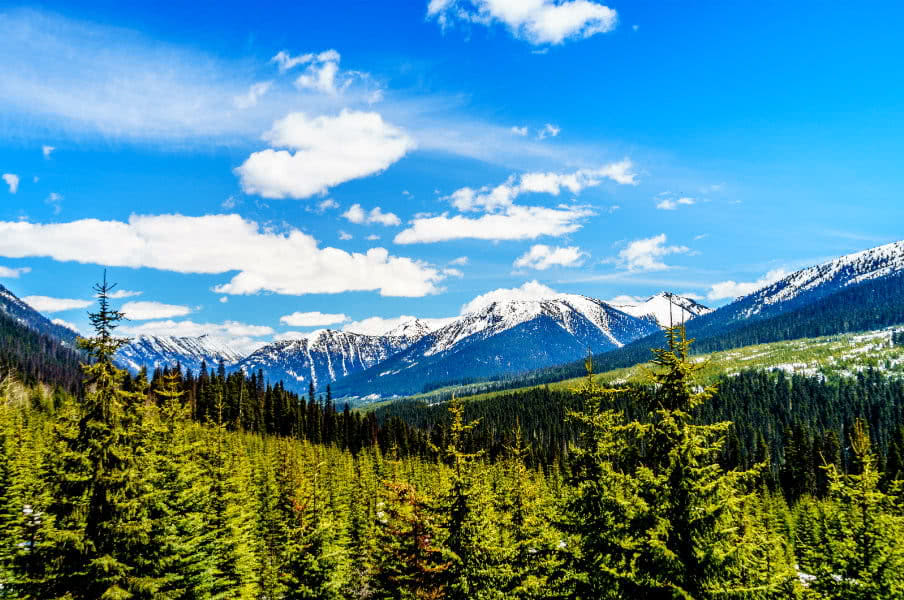 The drive to Sea to Sky Highway is another incredibly scenic drive not just in British Columbia but globally. Officially known as Highway 99, the winding road stretches from Whistler to Horseshoe Bay near Vancouver boasting dramatic ocean and mountain views. It is nestled between the Coast Mountains on one side of the highway and the Pacific Ocean on the other side. Driving usually takes about two hours on a four-lane divided highway. Not to be missed places to stop along the Sea to Sky Highway are Shannon Falls, Porteau Cove, Squamish and  Brandywine Falls. 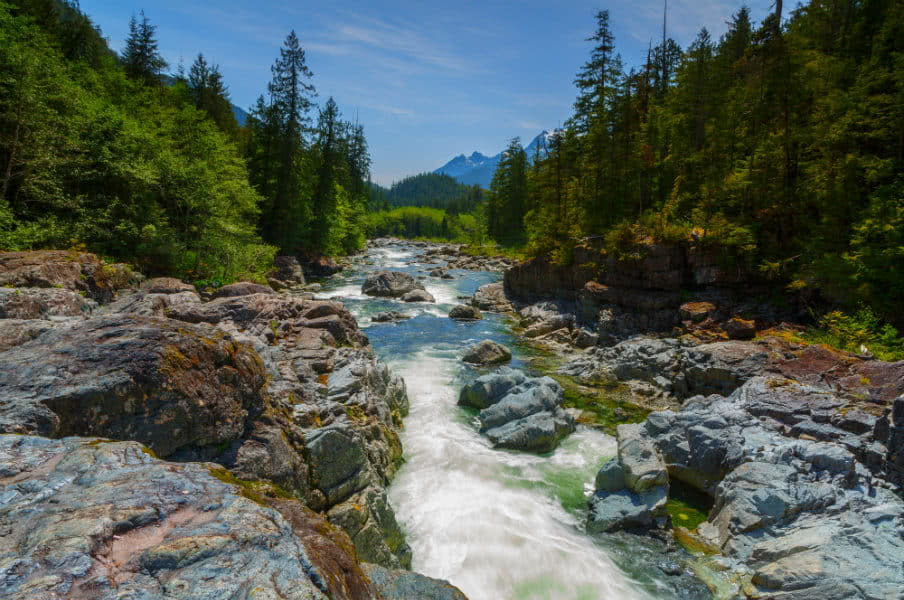 Considered the longest east-west main vehicle route on Vancouver Island, British Columbia, Highway 4 is called locally as the Alberni Highway to the east of Port Alberni and the Pacific Rim Highway to the west. The two-hour drive straight across Vancouver Island from Parksville in the east to Tofino on the west Pacific Coast, offers beautiful views of forest, mountain range and lakes. Don't miss the quaint small-town charm of Tofino nestled in the heart of the Clayoquot Sound, now a UNESCO Biosphere Reserve. Find out for yourself why this place is a popular destination for surfers, nature-lovers and campers.